In the current blog, we will explain and highlight key points of Defined distance (DBSCAN). This algorithm requires the user to have a clear Search Distance. It also allows the user to use the Time Field and Search Time Interval parameters to find clusters of points in space and time.

DBSCAN – defined distance with time, finds clusters of point features based on their spatial distribution. In the high-density region, the algorithm identifies groups as clusters and low-density regions are left as noise. Inclusion of time in this analysis will create space-time clusters.

How Does the Cluster Grow?

When time is added to the clustering algorithm, output clusters become more sensitive to the time. This will refine the result. This refinement comes with redefining the neighborhood. With the inclusion of time, neighbors of Core Points are not just spatial neighbors, but they should also be temporal neighbors.

Temporal neighbors are those points that are before and after the time of the Core Point. This is defined in terms of Time Step Interval. Defining Time Step Interval refines the total number of neighbors available around the Core Point. The points, which are not spatial and temporal neighbors, are left out from the analysis. Once this refinement is done; the clustering algorithm builds clusters around the Core Point and those that are not the part of the cluster are pushed out as Noise. With the above basic understanding of how Density-based Clustering Tool works, let us use the tool to understand where habitat clusters of Malabar Pied-Horbill exist in India.

Malabar Pied-Hornbill is a majestic bird that is spread all along western ghats and some parts of the Vindhya mountains. Data related to various observations of this majestic bird has been meticulously documented and is being shared via Global Biodiversity Information Facility (https://www.gbif.org/dataset/search). We have downloaded historic data (shown below in Figure 1.a) of bird observation with the objective of finding spatio-temporal clusters.

For identifying spatio-temporal clusters, we have used ArcGIS Pro’s Density-based Clustering tool (as shown above in Figure 1.b) with Defined distance (DBSCAN) as the clustering method. We also defined other parameters like Minimum Feature per Cluster (100 in this case), Search Distance (20 Kilometers) and Search Time Interval (5 years). 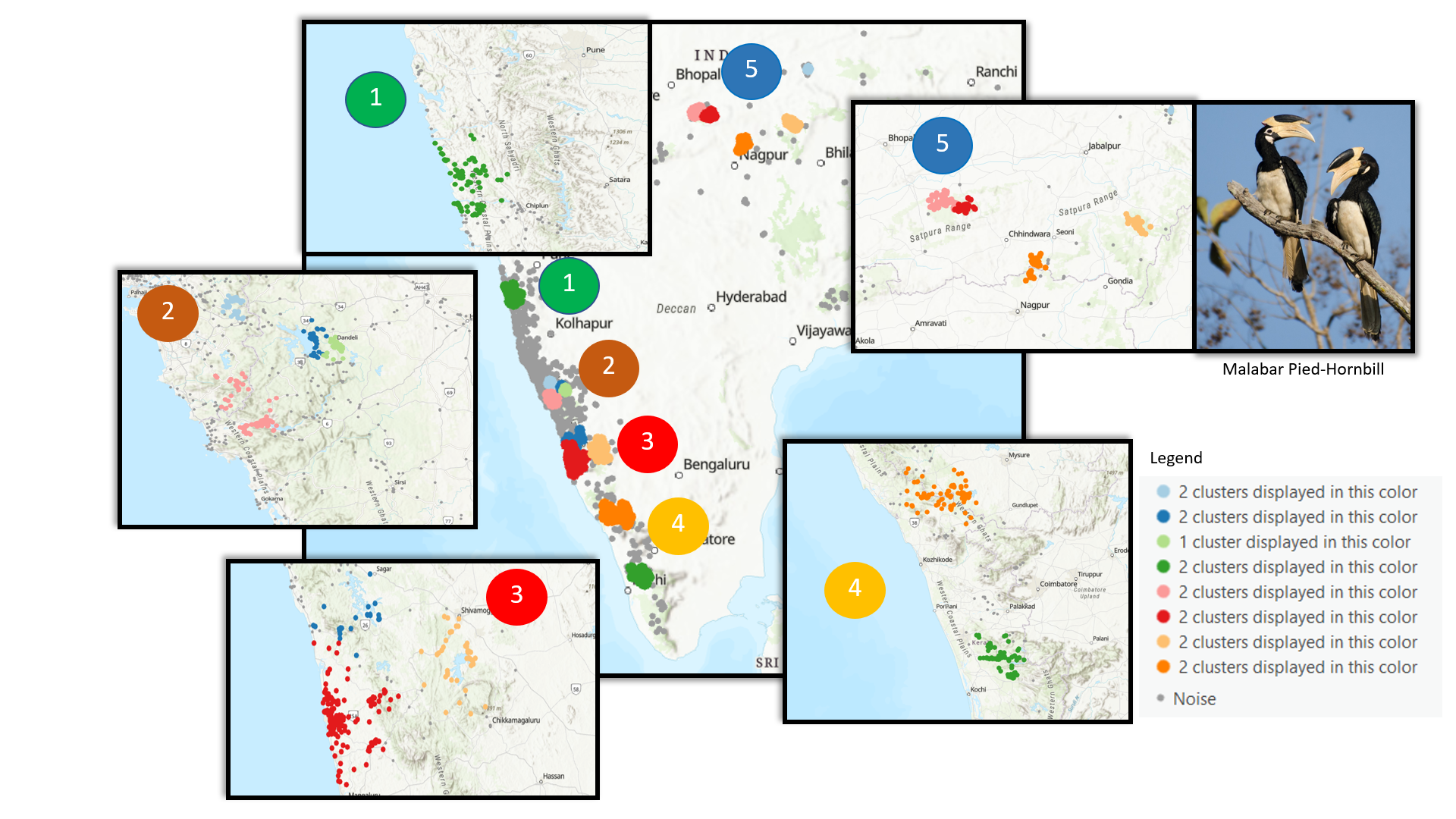 Resulting clustering contains 15 clusters spread across 5 regions. These regions (as shown in Figure 2) are

Using Density-based Clustering tool, we were able to answer some of the toughest questions of ecology with the click of a button. We were able to answer whether there exist spatio-temporal clusters (in the Malabar Pied-Hornbill dataset) or not? If clusters exist, then how many clusters exist and where these are spread across? Answering such questions is key for any policy level decision related to conservation of species.

Clustering tools are used to identify spatio-temporal clusters in the data related to events, like bird observation, accidents, theft incidents etc. Identifying clusters gives definitive direction for the policy makers or analysts working on pattern recognition. In the case of Malabar Pied-Hornbill, the results could be used for a concentrated and hyper local conservation effort keeping clustered area in focus.

Find your local Esri India office and get answers for your questions.

Give us a call

Talk over the phone